The Mont-Saint-Michel is the pride of Normandy. The rock - a UNESCO World Heritage Site - rises up higher in the bay with every spring tide. The abbey built on the rock invites you to visit. Come and watch the richly decorated halls and cloister. This masterpiece of medieval architecture symbolizes the expertise of the 13th century builders. 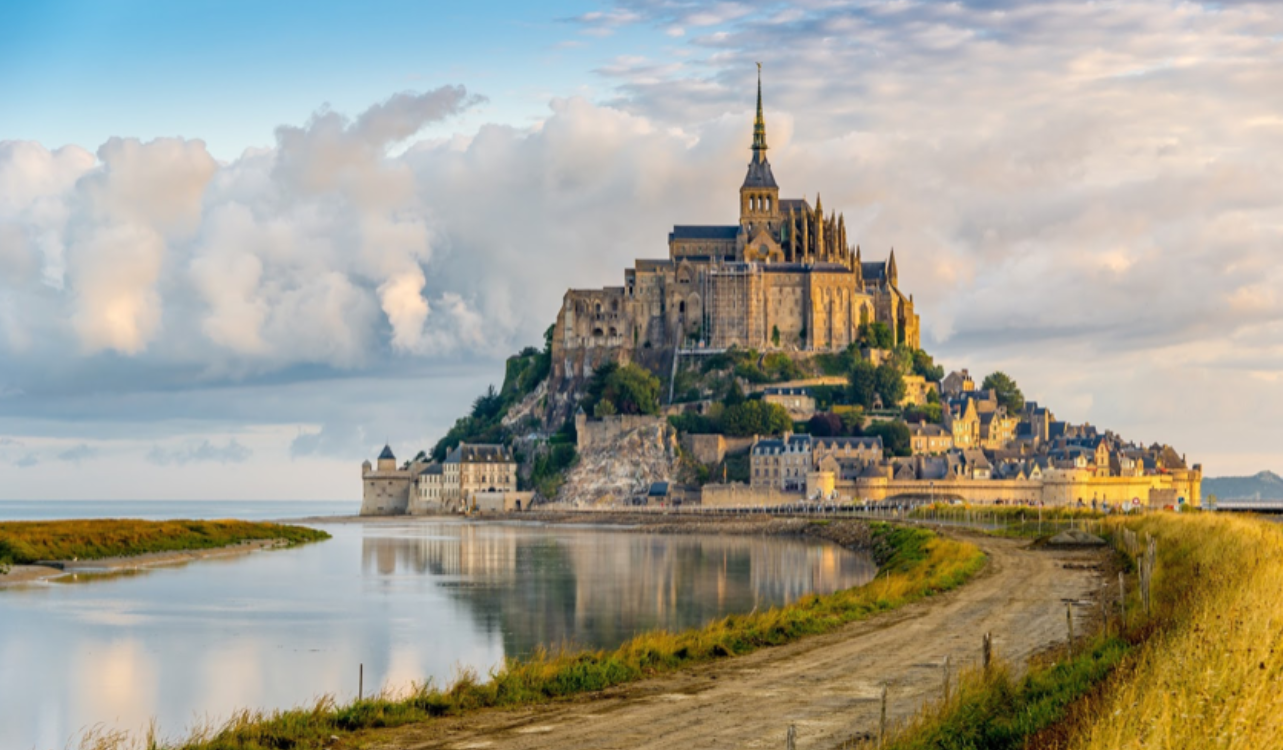 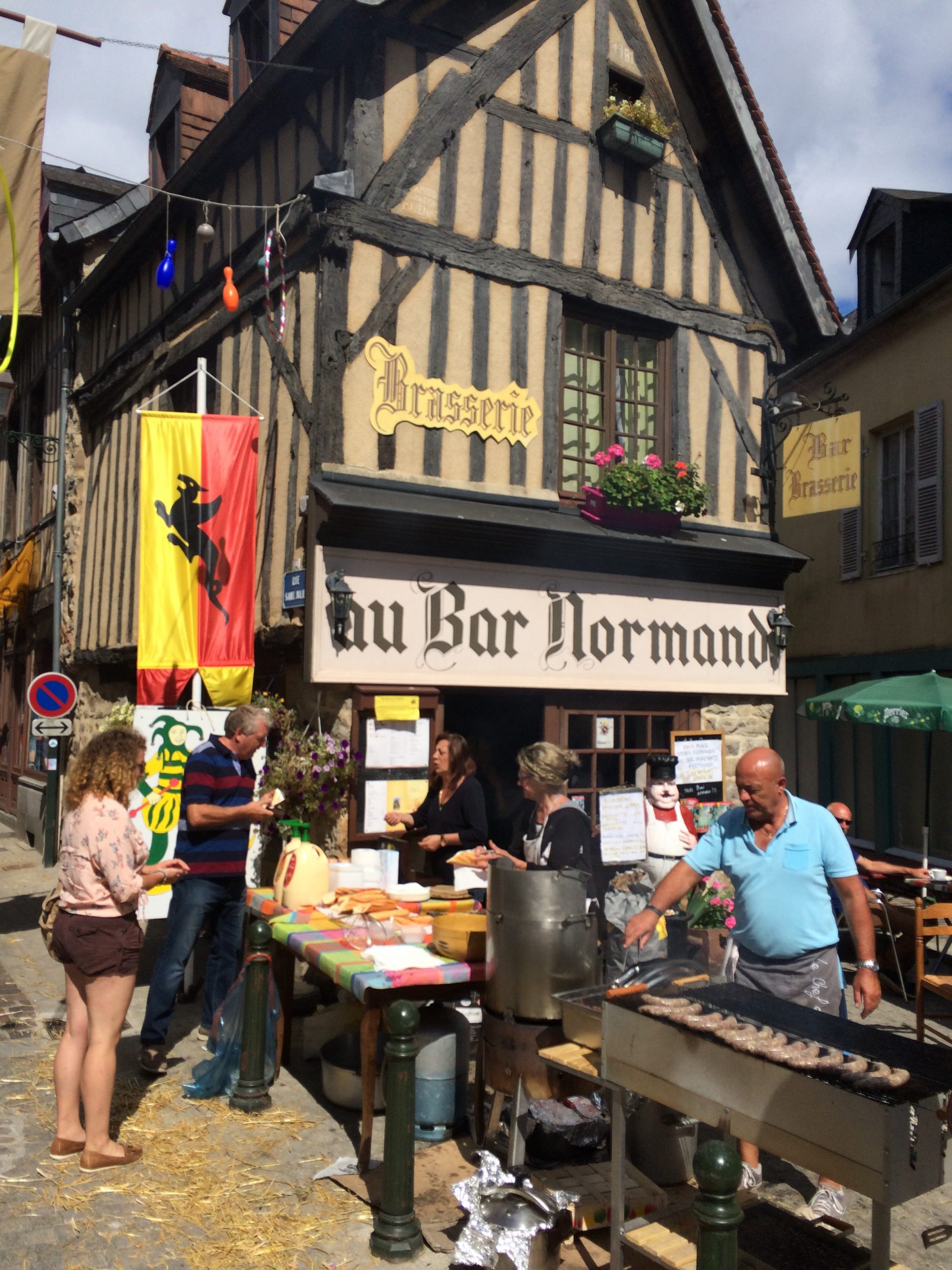 Perched on a hill above the Varenne Valley, the medieval town of Domfront, founded in the 11th century, has preserved many testimonies from its rich past. The charming squares and alleys invite you to stroll. The 12th century Romanesque church, the keep of the old castle set in a beautiful park, the towers and ramparts, the picturesque half-timbered houses, the mansions or the courtyards will enchant walkers. In addition to these discoveries, there is a beautiful view of the surrounding countryside from the Place du Panorama and the castle garden.

The largest waterfall in western France is located at Mortain. The Grande Cascade is more than 20 meters high. A little further down the trail is our personal favorite the Petite Cascade. The latter lies in a deep gorge cut by the Cançon (tributary of the Cance) and consists of several small waterfalls.

The surroundings of Mortain are laden with legends, starring King Arthur, fairies, gnomes and forest ghosts. The story goes that the Rocher du Dolmen would be the work of a giant! 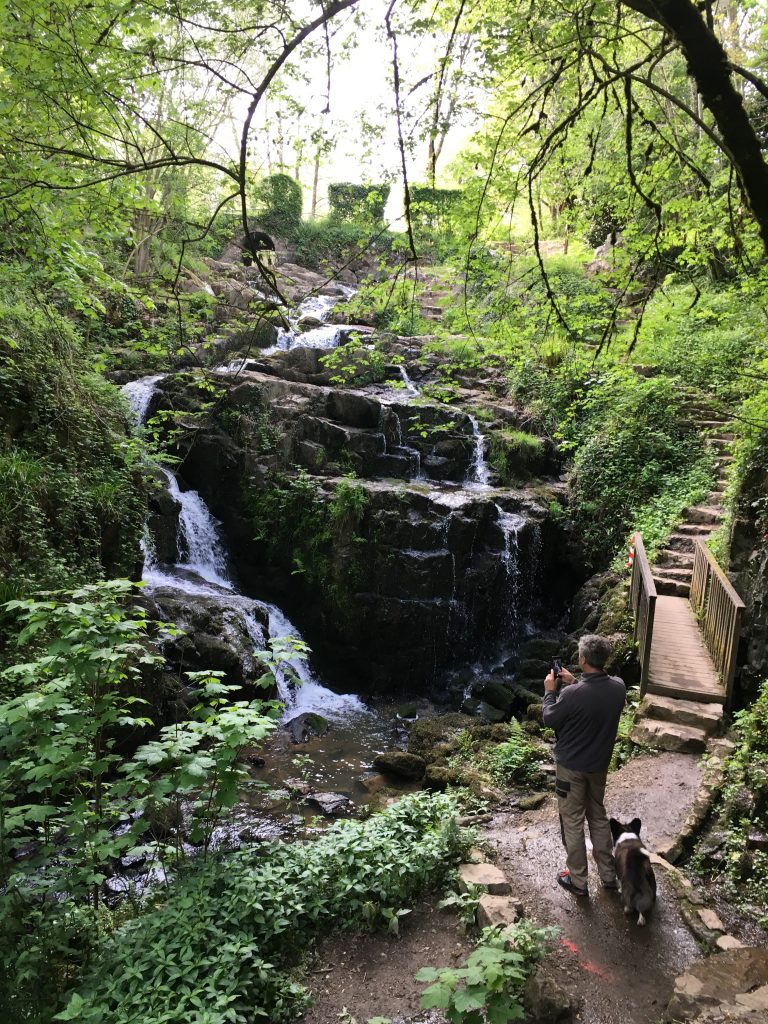 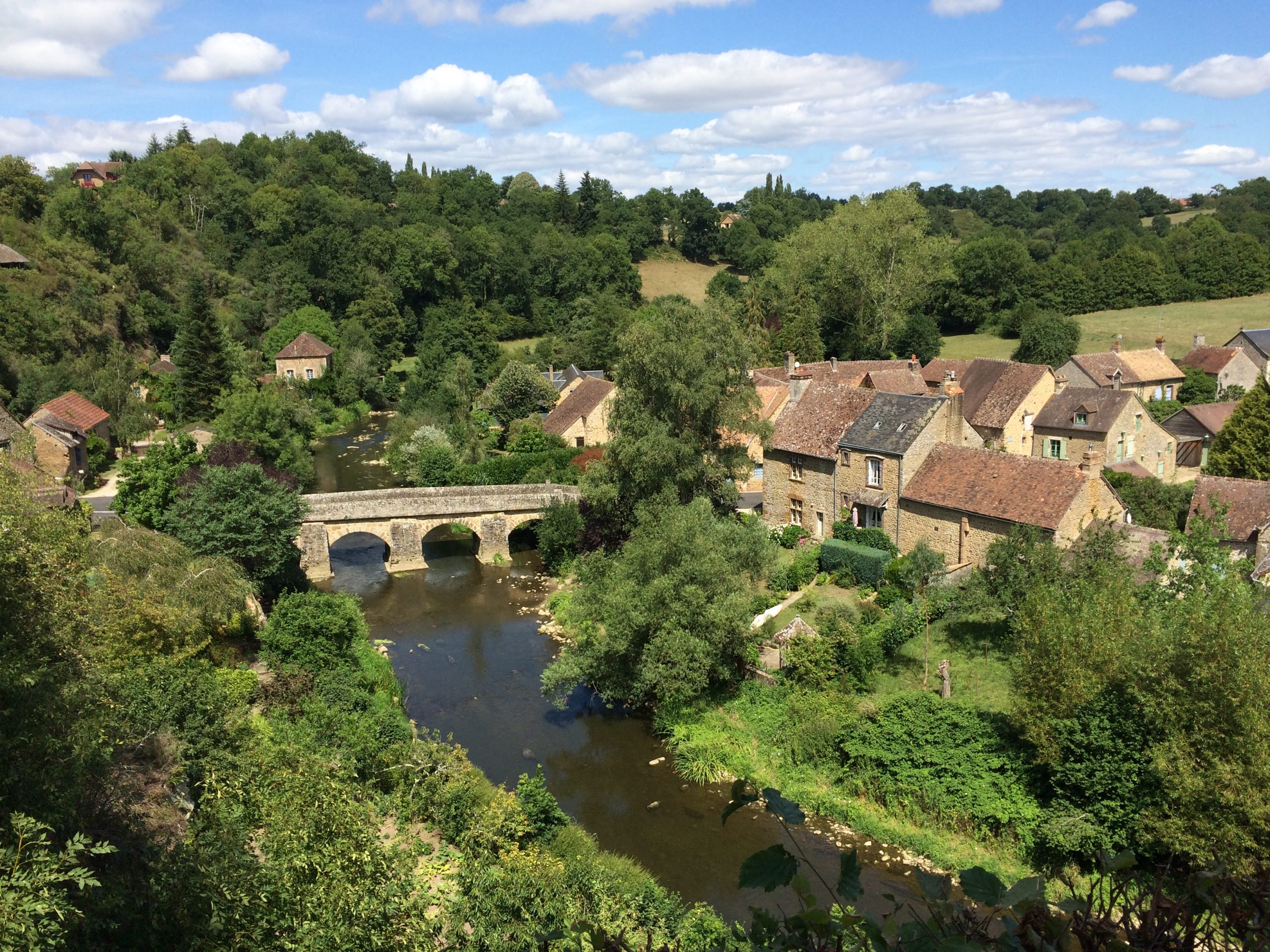 One of the prettiest villages in France

The village of Saint-Céneri-le-Gérei is one of the most beautiful villages in France and is located on the banks of the river Sarthe. Nestled in the heart of the Alpes Mancelles, in the Normandy-Maine Regional Natural Park. Romantic at will, this charming place inspired a number of famous painters, such as Corot, Courbet and Harpignies. The picturesque bridge over the river, the pretty stone houses, the Romanesque church and the Gothic chapel of the Petit Saint-Céneri are all treasures to discover during your walk.

As a fishing port and oyster center, Cancale is famous for its flat oysters that make many seafood lovers happy. Cancale, located in the bay of Mont-Saint-Michel, is a seaside resort where you can stroll on the quays and piers of the harbour of La Houle or relax on the beaches. Or come and taste the famous oysters on the pier. Fresh from the sea on your plate. Don't forget to bring a bottle of white wine or bubbles. From the top of the church tower, the view of Cancale, its harbour, beaches and the bay of Mont-saint-Michel, is magnificent. 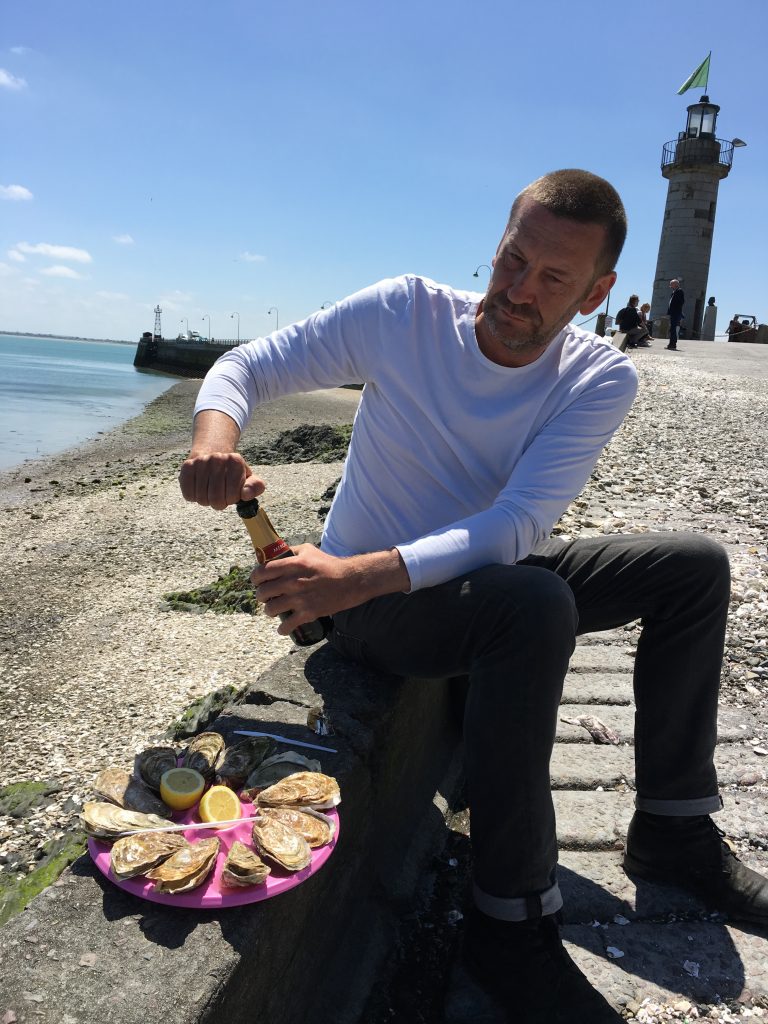 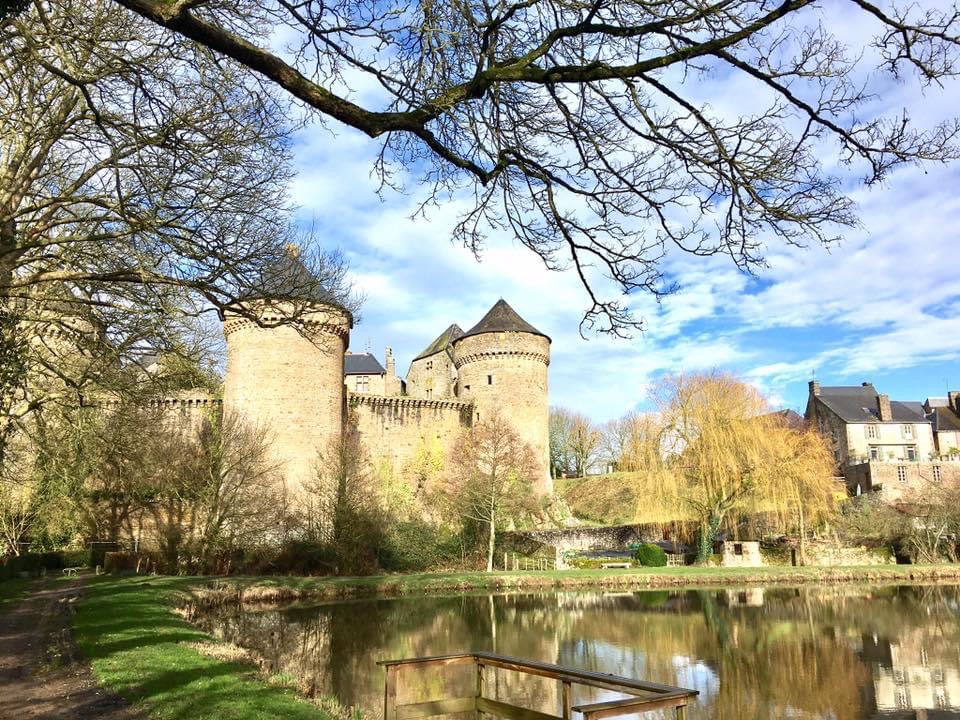 Nestled in the heart of the Normandy-Maine Regional Nature Park, the characterful town of Lassay-les-Châteaux is worth a visit for several reasons. The medieval castle, the two fishponds, the wash houses and granite houses, which makes the town incredibly photogenic. A particularly harmonious castle, which will certainly appeal to lovers of old buildings! The castle fortress of Lassay, from the 14th and 15th centuries, is a remarkable example of medieval military architecture with stone galleries and eight towers.

The sea-facing privateers town of Saint-Malo is now a famous seaside resort. The closed city of Saint-Malo, surrounded by ramparts, was rebuilt wonderfully identically after it was destroyed for 80% in August 1944. The city of Saint-Malo is a beautiful whole, with its ramparts, castle and beautiful buildings. A walk on the ramparts is inevitable and offers a magnificent view of the sea, the sandy beaches at the foot of the ramparts, the National Fort (a work of Vauban), the harbour and the buildings of the city center. 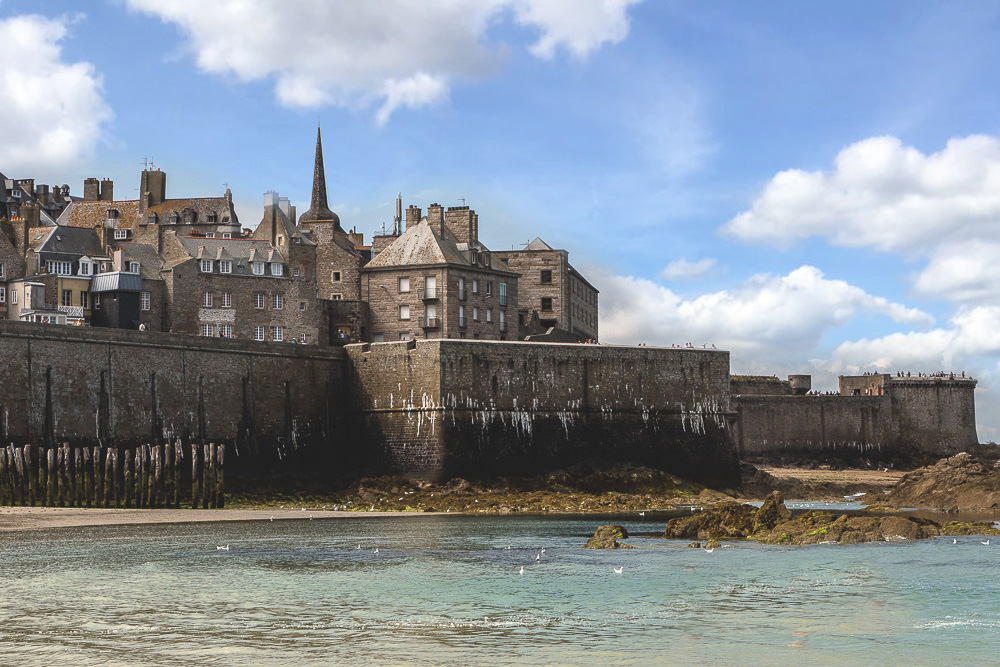 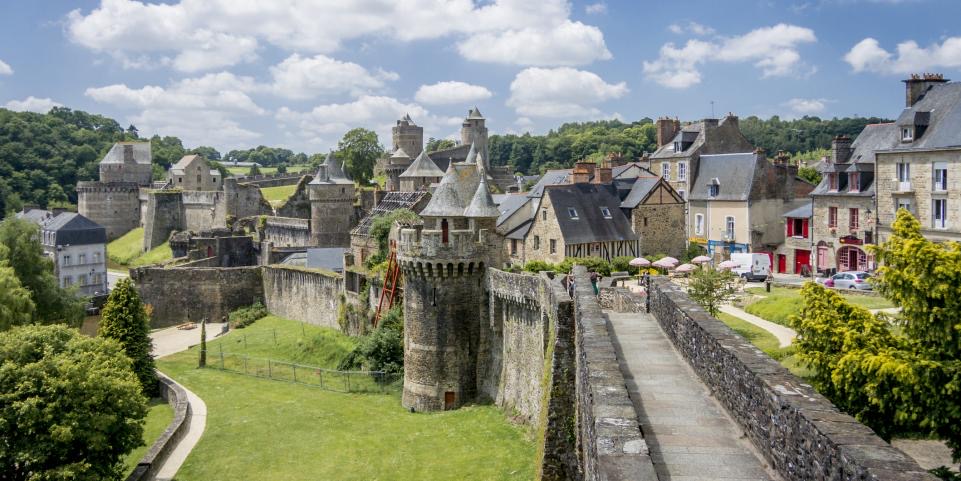 Discover the castle of Fougères

The largest fortress in Europe with an impressive castle can be found in the city of Fougères. It is an great example of the development of medieval military architecture and was intended to protect the Duchy of Brittany from invasion. The city was originally enclosed by wooden defensive walls since the year 1000. The now stone imposing city walls with carved galleries connect the towers. The castle is built in three levels, the outer castle, the courtyard and the castle walls.

Nestled in lush greenery, in the heart of the Andaines forest are the thermal baths and spa's of Bagnoles-de-l'Orne. Known for its beneficial water sources. Bagnoles-de-l'Orne is a bustling place with a lot of charm and art deco architecture. You will find casinos, hotels and villas on either side of the beautiful park with swan lake. 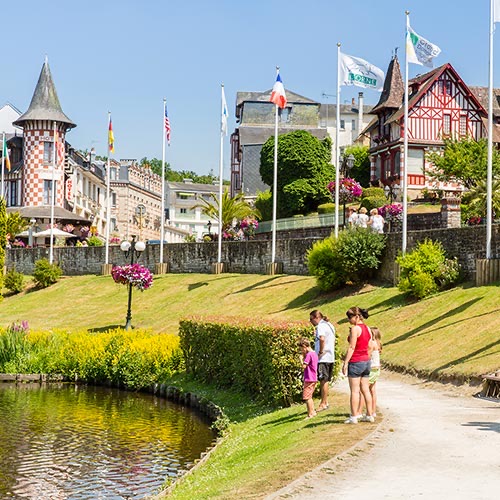 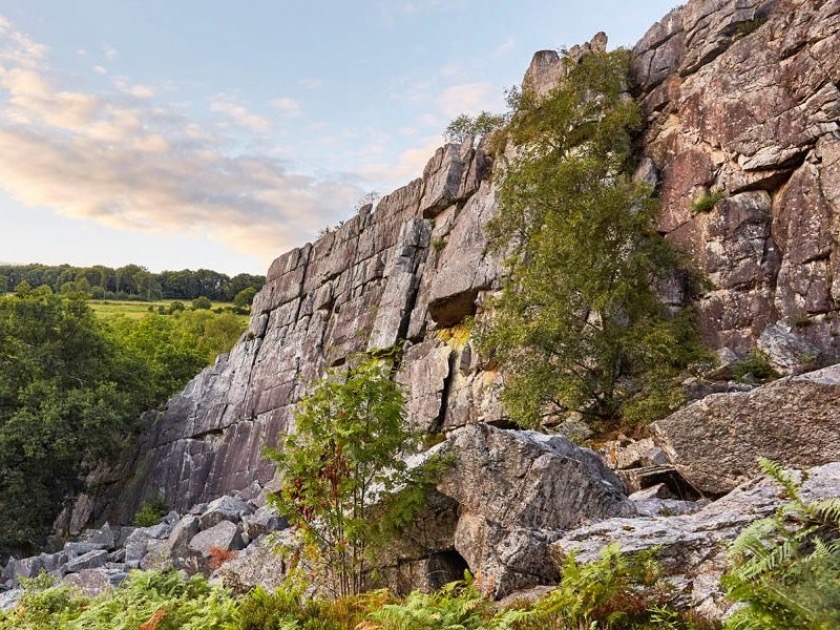 The legendary King Arthur is not dead. Local tradition has it that the king sleeps in a cave on a stream in the department of Orne between Domfront and Mortain. There is La Fosse Arthour. At the foot of a large rocky outcrop is a stream where a water spirit lived (or still lives?).

This water spirit had separated King Arthur from his wife: since then they each resided on one side of the water. Only when the sun had set were King Arthur and his wife allowed to be together. One day Arthur opposed this ban. Before nightfall he went to stream. But as soon as he set foot in the water, he was carried away by the water. Desperate, his wife committed suicide.

Taste and buy Calvados from the neighbors

Our village Mantilly is the capital of the poiré (pear cider). The Route Poiré also passes through our village. On the route you will find many places where you can taste and buy calvados, cider, poiré and pommeau. Calvados from our region is very special. In addition to apple, it also contains pear (at least 30%). This method is called Domfrontais. 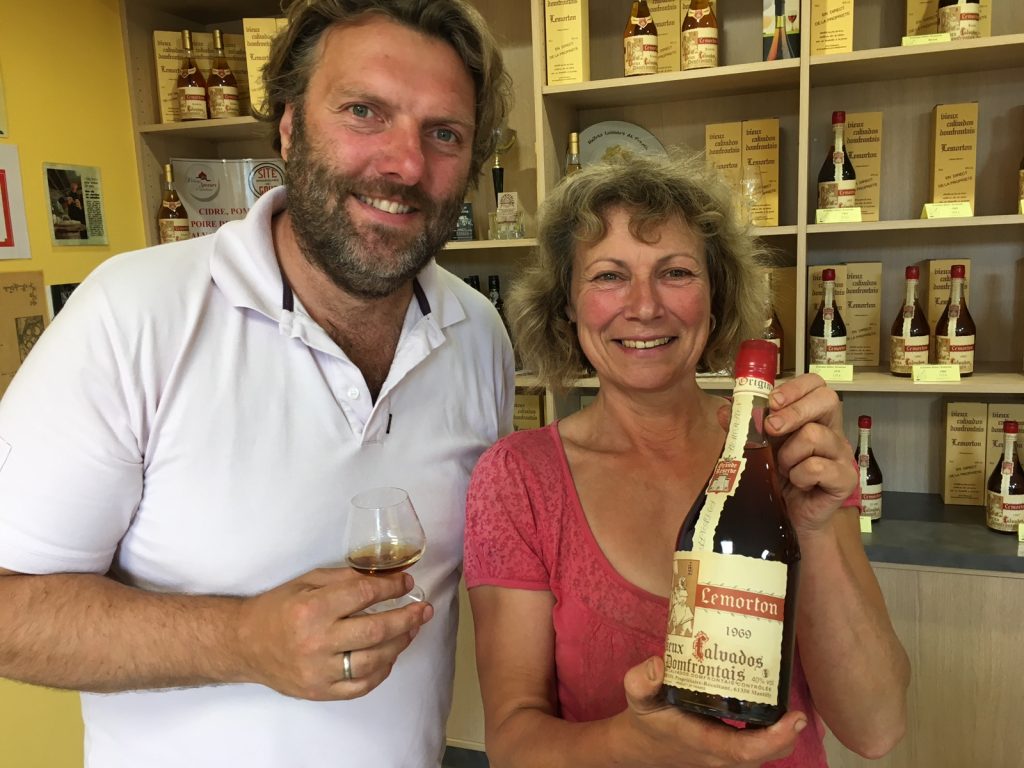 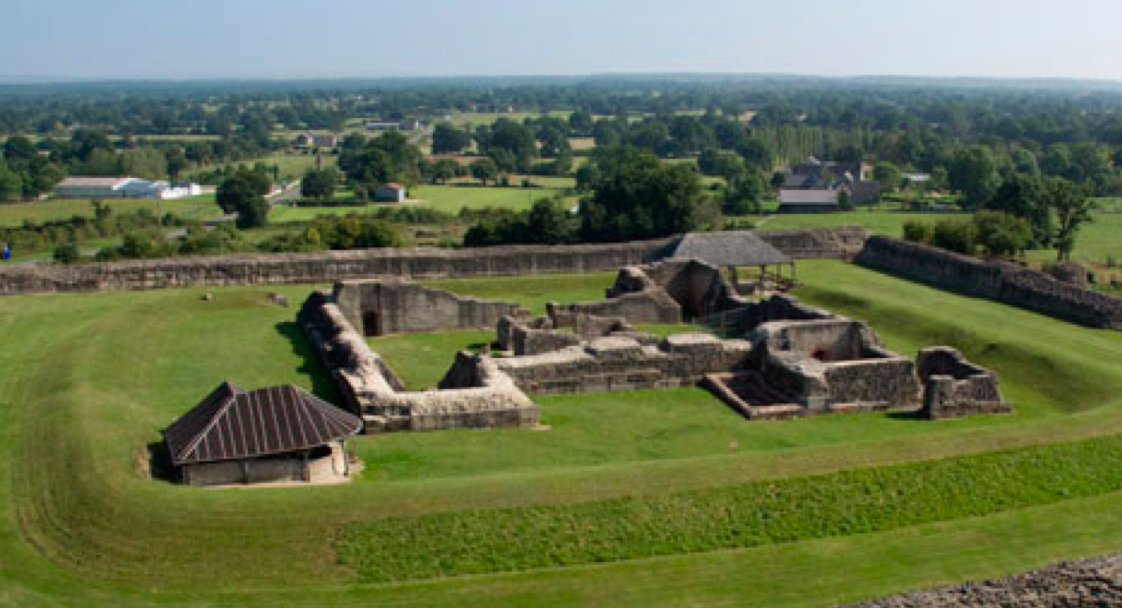 The Roman archaeological site of Noviodunum was founded by the Romans in the 1st century of our time. This place, where the town of Jublains is now located, has a rich past. This can be seen in the remains of the baths, temple, the theater, and the settlement that are scattered around the site.

The baths, visible under the current church, are illuminated with images and sound; the impressive fortress, former fortified warehouse where precious metals and taxes in kind would have been transferred; the large theater with grandstand, built around 80 AD; the reconstituted Roman streets… All locations that make Jublains a great destination for lovers of ancient heritage!

In a mysterious and mythical place near the town of Juvigny sous Andaine stands the tower of Bonvouloir, the last witness of the old castle of Bonvouloir. Listed as a historic monument, the tower was built at the end of the 15th century by Guyon Essirard, the steward of the Duke of Alençon. The story goes that Guyon Essirand fathered more than ten children. With each new birth he had the tower built a few meters higher. 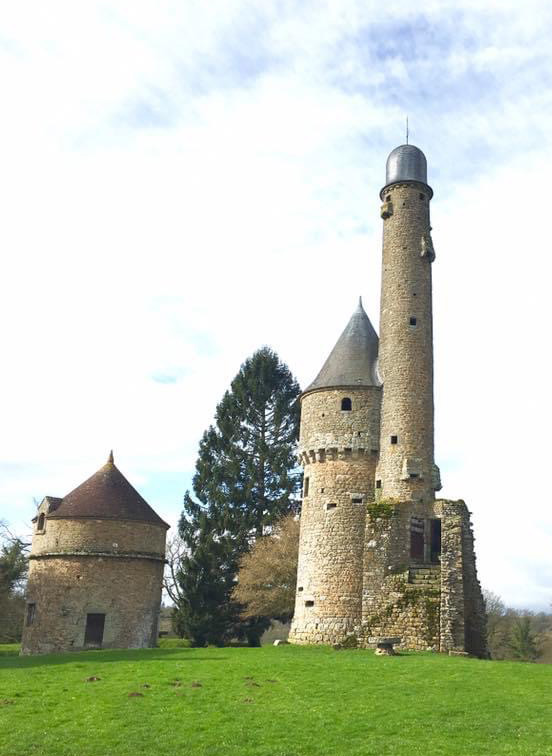 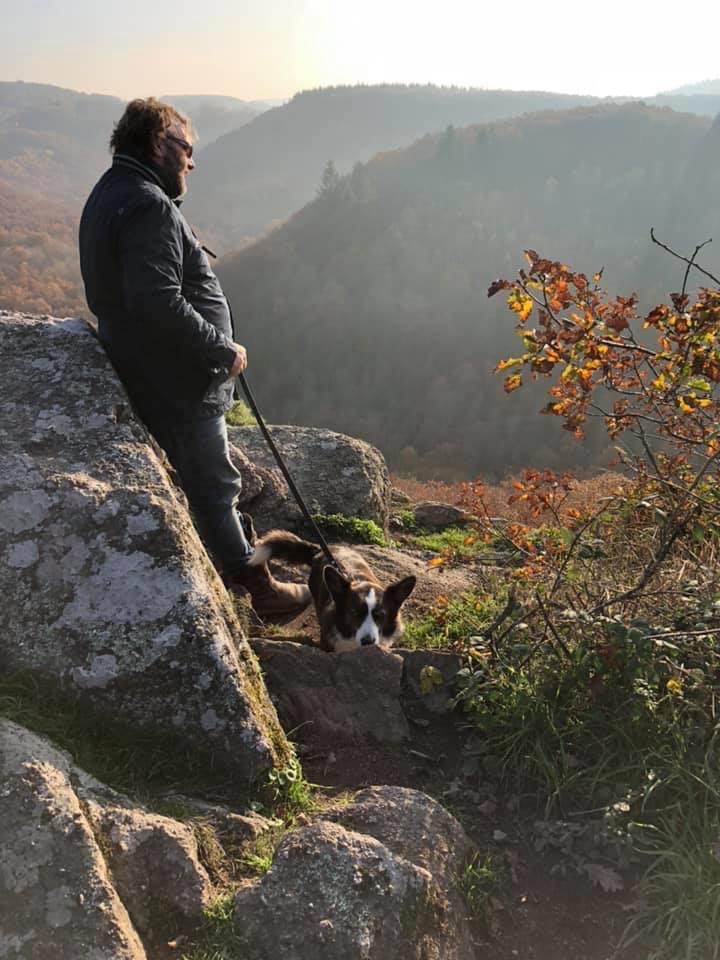 The peaks of Swiss Normandy are 300 meters high, no real mountains, but the landscape here is unmistakably reminiscent of the Alps. Nature has been shaped by the rivers and the forest. The slopes of the deep, green valleys are steep and the water has often carved surprising shapes into the rocks. And to complete the picture, some picturesque villages have been stuck in the valleys or against the flanks of the hills. Here walkers can indulge themselves.

Located on the border of Normandy and the Pays de la Loire, Mayenne has left an impressive castle from its past as a fortified and ducal town, the contours of which have graced the waters of Mayenne for over a thousand years. Mayenne castle was successively a Carolingian palace, fortress and prison. It is now a museum dedicated to medieval history, with a remarkable collection of pieces from the 10th to 12th centuries. 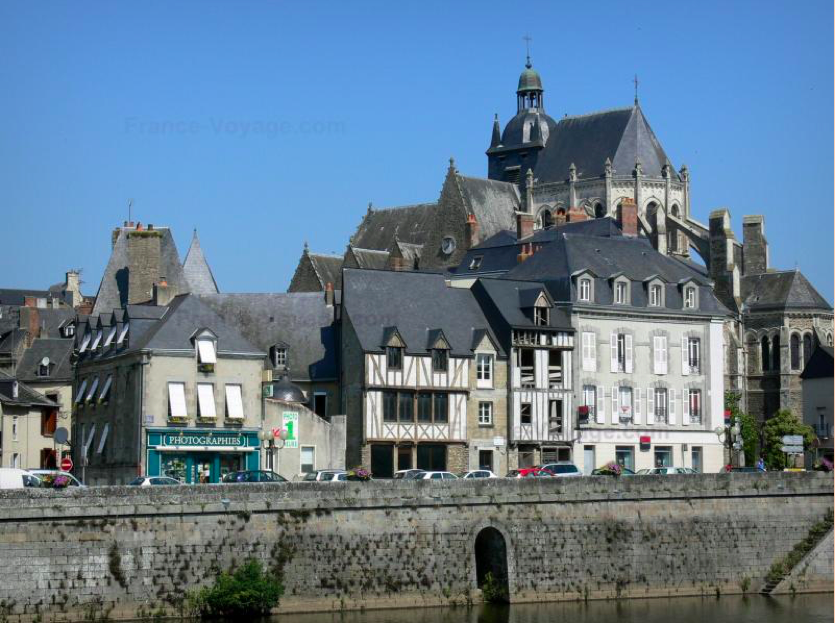